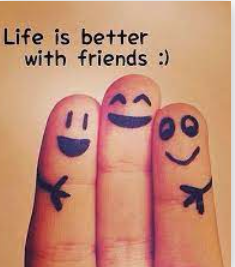 Arianna Mendoza: Okay Anyi, thank you for being here with me.

AM: Uh, during six grade, um, it was history time and we had to do a history project. That’s when things started going tough and things started to go downhill. So we had to do a project, I think it was about soldiers, I still don’t remember [low chuckle]. I think it was about soldiers and there was me, you, Lindsey and Emily. I remember me and Emily were, um, like faster than you guys. You guys were still reading and like we were already annotating and ready to write and like, I’m not gonna lie, I was about to leave you guys. Cause like I was not gonna put up with you guys reading two freaking paragraphs and I was like okay, Uh, I’m just gonna annotate and start writing. And Emily talked to you guys and was like um, do you guys want us to slow down, or do you guys need help or what kind of things do you guys wanna do. I was like seriously? And then um I remember you guys saying, “No, no,” looking at each other like “no, we’re fine, no nothing.” S

So like we kept going and then that’s when like later on, like five minutes after the bell almost rang, I remember hearing you Anyi, say um, um, “I wish she was dead.” So that’s when I like was completely torn off, I was so surprised and like at the end when the bell rang, I ran faster then you guys out of the room and I saw your cousin there and I was like “Bethzy, tell your cousin that our friendship is over and I’m done.” I left and she was like, “What?! Why! What’s wrong? What happened?!” And like I left outta there. I was like, uh uh, I’m not talking about this. I went home crying cause I was so surprised that happened and like you even said that. I was so surprised.

AV: Well when we were doing our project, in sixth grade, me and Lindsey saw that you guys were ahead, and we were just looking at each other talking about how we should tell them to stop or not and us both being shy [inaudible] should we tell you guys? At first I was like, “Oh it’s just gonna be a small little argument.” We’ll talk tomorrow probably. We’ll probably text later on, and it was too late for us to change our [inaudible] cause we already started doing our projects.

AV: And um, We should probably like not tell them we did not want to do this. And all that stuff. But at the end when we left um, I know we were going slow and then I was seeing my cousin Bethzy.

AV: She came up to me and told me that our, our friendship was over and I said I didn’t believe her. Like you know, I looked at Lindsey and just thought, “What happened?” And then on that day I just thought about like the whole thing and like how at first I thought you were going to text me saying that it was just a joke or stuff but you never texted me. Or you know what, her sister must have taken her phone away, or you know what, she must have gotten her phone taken away. And I was just coming up with excuses in my head, like ugh, it was hard for me.

AM: Yeah that’s the problem with like us. Or like I feel like any other friends would like, I feel like the problem is you stop talking to each other. Like, that’s not how the problem is solved. You gotta keep talking, you gotta talk through it. But noo, because of us, we’re not like that so we just ignored each other. Well I ignored you first of all and then you just came up with excuses. I was tired and done. We didn’t talk to each other until like later on. Can you tell me about like your part of the story of the counselor?

AV: Yeah. So, um a few days later after our fight, I was, it was a Friday and that’s when on Monday when Lindsey came to me and said, no, she was texting me on Friday saying that Arianna’s sister was looking for me and her saying that we called you stuff, and told you stuff and we just, well you were crying so that day I was unbelievable. I was like, we didn’t even say anything to her. I don’t know why she’s crying. Like weren’t not telling her stuff. And then there was another Friday that she came to see if I was there again. But I left early that day too and she told Lindsey again that you were crying again. And by that time, I was like okay, I don’t know why she’s saying that if we never told her anything. And that was when, that was when I was over there, Lindsey was showing me Mr. Garcia and he was like, “You should go tell the counselor.” He was like, “In fact we’re gonna go right now um do some information papers to talk about it.” And Mr. said we’ll just talk about it. And this is like important, you need to tell an adult and we were like okay, so we went. Um I remember, I was getting out from um practice and I saw you and your sister and I remember this like very clearly. You were sitting on a metal chair.

AV: And that’s what warned me because all of a sudden, I was talking to someone and I guess I was talking too loud. You guys heard me and I heard my name and then I heard a chair drop and I just ran.

AM: You ran straight out of there! Like peace out. [Chuckles]

AV: On god. I did. And that’s when I ran out and I was just telling the counselor and I was writing on the paper right.

AV: And by that time um we went to go and I went, I remember um specifically, and the next day we were in sixth grade. Me and Lindsey were sitting together and you were sitting somewhere else because we weren’t talking by that time. And since you were there um, Lindsey and I were called to the counselor’s office and we were just talking about stuff. And I guess, I don’t even know what made her wanna come but she told me that she was gonna call you. And I was like, at first I didn’t feel comfortable with you coming.

AV: And then she said, “Imma go talk to her outside but she’s not unfortunately coming here.” And I was like, “Okay” and that’s when I remember talking about how you felt like, like left out. Lindsay and I were longer friends so it was between you too and I would choose her because we are friends–

AV:  Um, we were friends without you and she was all [inaudible] at the same time before I met you. And that’s when I also was talking to the counselor. She’s like, “Well if you guys are gonna end up becoming friends, you guys need to talk to each other and tell each about the whole thing” and then that’s when we started talking about some stuff.

AM: Okay so, yeah you’re right, I remember like briefly almost everything but like I remember, like stopping my sister from like going to you. I remember telling her to stop but no. Like she freaking threw the chair on the freaking floor. Since it was like metal or whatever type of it. It made a noise and she called your name. You ran out freaking running and then the next day, I remember getting called to the counselor and I was like, I was surprised cause the only time I go to the counselor is for my brother. So I was like, “Oh okay then, so I guess he must have done something or he needs help in something.” Family contact stuff and I was like, “Oh okay. I guess I’ll just go.” And when I opened the door I saw you and I was like, “God no, uh uh. I’m not doing this right now.”

Cause like I sat down, we talked about what happened with my sister and stuff. [Clears throat] And then that’s when like I started like saying, “Mo, I tried to stop her and stop before I got blamed for nothing.” Like you were crying and I was like, “Oh my god. This is not happening right now.” [Chuckles] Especially the last day of class, like I was missing class and then I remember when we got to the topic about how it started and we talked about grades. That is the most pathetic thing-

AM: That I literally talked about. Okay so, like it started with a project and then I got tensed up and I started fuming. And then that’s when the counselor was like, she stood up straight like “Whoa there! Calm down. I can see that you care about grades a lot cause like you firmed up and like very confidently talked about it.” And I was like, “Yes very much so.” [Chuckles] Cause I remember like, cause I very care about grades. You do too, but like I care A LOT. And I remember I wanted to laugh but like you were crying and looking at me so I was like, “Oh this isn’t a good time” so like we kept talking and then we both started crying like a little while after and when we finally like fixed it, part of it. That’s when Lindsey came in. Oh god Lindsey. So when Lindsey came in I was like, “Oh come on. I already finished with Anyi. What are you doing here?” And like, so that’s when I started deaf staring at her because I was not gonna put up with her and like all that stuff. I was tired of her. She was also part of the problem. And like I remember all of that and her coming in and I was just like, “Um I’d rather do you then her.” I was like, “I’m not about to talk to Lindsay.”

AV: We all kept talking about all of us and we just ended it there and we made up. Well most of it. That story helped you know that any part of you is fine because you’re smart and you’re just you and you told me so much about how you change for everyone.

AM: I just want to say thank you for being there with me, helping me with who I am and staying there when things were tough. You know how hard it is for me to make friends and to stick with one personality because I change for every person but with you I felt like I found the person I want to be and you were always there making sure I knew that any part of me was fine. We have gone through a lot since then but I am really grateful that you helped me with my identity. Thank you for being here and in this interview.

AV: Your welcome and I’m glad we both talked about this and fixed it.