Diary of a Wimpy Kid: The series 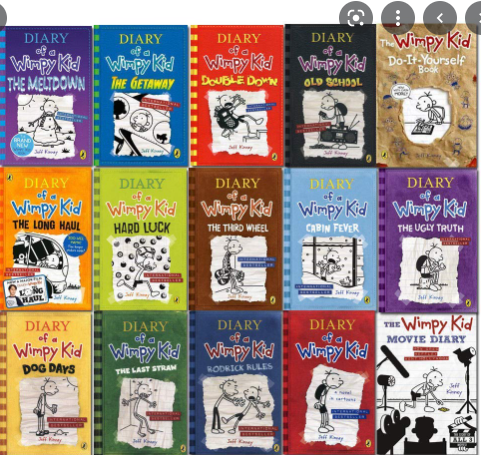 Diary of a Wimpy Kid: series

The Diary of a Wimpy Kid is probably one of the best series I have read. This series has been really entertaining and fun to read as there are lots of drawings that really tell more of what is going on in the book. This book has lots of little jokes that keep the entertainment of the book going. This series has been non-stop action and has shown a lot of exciting scenes that have you attempted  to know what’s going to happen next.

This series is based on this boy named Greg who has two brothers. Their names are Manny and Rodrick. Manny is the youngest brother. He is really annoying, likes to whine a lot and causes lots of trouble. Usually when Manny does something bad, Manny blames it on Greg and gets Greg in trouble. Rodrick is the oldest brother in a band called Loaded Diaper. Rodrick likes to play pranks on Greg and well there are times when Rodrick does a bit too much. Greg also has a best friend named Rowley. They are always hanging out and usually go on adventures together. Usually when they go on adventures it’s mostly if they want something and they want it badly and try to find a way to get it. Although they sometimes get in dumb fights they always have each other backs.

This book is really fun as throughout the whole series there are lots of jokes that get told and can really entertain other kids. I recommend this book to everyone because if they don’t know what to do just read a diary of a wimpy kid and you will not be bored. Most of the jokes in the book are sometimes meant to be funny and sometimes not or they can end up being awkward.

This book is really good it talks about not only what they do regularly but, it talks about the seasons and what they do such as during winter Greg and Rowley love to go snowboarding and there was a time where there was a snowball fight that lasted so long but it was very entertaining and i was really tempted to know which group one the snowball fight. This is a really good book and if you end up loving the book their is also a movie i think that you can watch with your family and spend a good time.