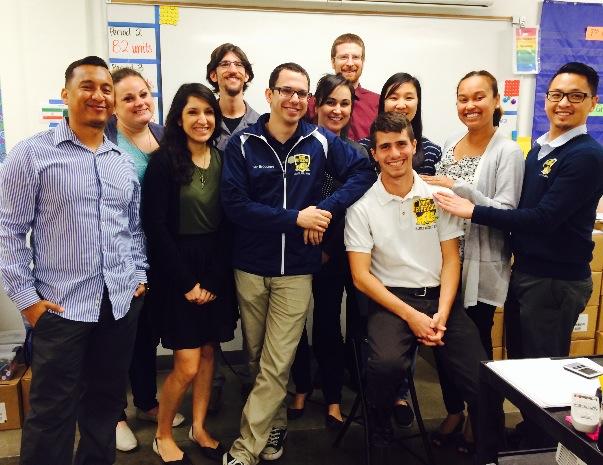 These are the teachers at AJCMS that take on another responsibility as a coach.

At Animo Jefferson Middle School some teachers take on both the teaching work and the coaching job which makes them have two responsibilities at this school.

Students Run LA (SRLA) coach, Carl Finer, said if he had to choose between coaching and teaching he would choose coaching because helping students in class is one thing but then he experiences getting to push and motivate students outside the classroom it helps with everything and helps him with his own running. “Just trying to balance everything I feel like sometimes each day 120 things need to be taken care of or each student being different and I have to juggle things to make them work,” said Finer. Finer became a coach because on his 2nd year of teaching at LA Academy Middle School, a teacher heard he was a runner and came to approached him, telling him that they were starting a new program called SRLA where kids train for marathons so she recruited him to be a coach. Finer said, “This is beneficial to me because this is my 9th year coaching and 11th year teaching, coaching gets me through the way and I get to know students in a different way and support them.”

Basketball coach, Tiffany Fang, enjoys having two responsibilities because its been something she wanted to do which is teach and coach so its nice for her to participate in the school and the activities. Fang said, “Well I can’t run long distances so I can’t be in SRLA and I can’t play soccer but I could play basketball, I have been playing basketball for over 10 years so this is why I decided to be a basketball coach.” Fang thinks that it’s nice to have a role besides teaching because she gets to have another relationship with students besides just getting to know them inside the classroom. Fang said, “The strategies we use in the classroom is somewhat the same thing we do in coaching and technically I’m teaching my students to play basketball.”

Soccer coach, Javier Alvarado, said that being a teacher and a coach is a privilege because he gets to know students outside of the classroom and at the end of the day it helps them how to behave and how to be an effective communicator. Alvarado said, “I think two responsibilities is beneficial for me because I get to know kids in the classroom and outside of the classroom and they also get too see the different side of me in class so I get to know them at a certain point.” It gives Alvarado a little time to plan lessons but he stays organized and plans them ahead of time. “I would choose a coach if I had to choose over my two responsibilities because I love sports and well I also love teaching but what I see that in sports is the way that people interact with each other.”

Cheer coach, Teresa Argueta, loves teaching to all her students and she said that it’s lots of fun however coaching is a different kind of fun. “I think with having students that are not my students in cheer has been really helpful because I get to know more girls on campus and interact with students that I don’t see at a daily basis,” said Argueta. For Argueta coaching takes away a lot of hours for planning and grading, she feels that over time she has become more organized and she finds the time for her students to be successful at all times. Argueta said, “I really like doing both being a teacher and a cheer coach, I feel like I have been a teacher for so long I could balance both jobs but I would obviously choose teaching if I had to choose between both.” Argueta didn’t decide to be a cheer leading coach, she was asked to help  because many teachers were leaving the school and she decided to step up and help.

SRLA coach, Adam Davis, said that he wouldn’t give up on seeing kids grow especially if they push themselves to do things that he couldn’t do on their age. “This is beneficial to me because I grow as a person with my leadership goals and learning from other students,” Davis said. Davis loves to get to see students outside of class even though it’s more work but he has the chance to see students grow. Davis thinks that the extra work is the hardest because sometimes he has to run 15 miles and come back and plan lessons which makes him feel exhausted. “My SRLA students are really great, the last practice they pushed themselves and I’m proud of them on how far they have gone,” Davis said.

SRLA coach, Matthew Pear, enjoys being a coach and a teacher because there’s a different relationship with students. “This helps me a lot because I usually go and work out on Tuesday mornings and know I have someone to join me,” said Pear. This is Pear’s first year so he said that he can’t really join no other serious groups so he decided to just help out SRLA. Pear said, “The hardest thing is working with students that don’t want to be learning and coaching that is no issue at all.”

Basketball coach, Thomas Lo, feels that being a teacher and a coach is very rewarding but very tough at times, yet beneficial because he likes both jobs and gets to know students outside of the school. Lo said, “There’s a lot of time in practice and there’s a lot of time in planning lessons and grading so it definitely doesn’t give you a lot of time because it takes away from planning but at the end I end up doing both of them.” Lo chose to be a basketball coach because he enjoys watching and playing basketball and he thinks that he knows a little bit of basketball.

SRLA coach, Gabriela Dampier, said that even though she has to find time to do both things as a teacher and a coach she doesn’t regret teaching and coaching is one of the things she enjoys doing yet she has to make sure she’s a good teacher. Dampier said, “I really like having two responsibilities because students get to know the other side of me not as a serious teacher, also I get to know them and it’s cool to see the students outside of the classroom and be part of the school in a different way.” Dampier chose to be a running coach because her second year in Philadelphia she went to a race with her kids and she saw how much it changed them, also she enjoys running so when Finer invited her to be in the team she was excited because it was like having a little family in campus. “If I had to choose between teaching and coaching, I would probably choose to be a teacher because my job is to educate my students so that they could get to college,” said Dampier.

Soccer coach, Elizabeth Borum, likes having to be a teacher and a coach because she get a different relationship with students and interacts with students as a coach instead as a teacher. “The toughest thing in having two responsibilities is knowing that I want to put the best team out there and I want them to win yet I need to make sure for them to keep up with their grades by going to guided study, sometimes having to tell them to not play because of their grades,” said Borum. Borum thinks having double duty is worth it because she loves soccer and she has always wanted to be a teacher but if she had to choose over a soccer coach and a teacher, she would be a teacher first. “I have enjoyed playing soccer for 10 years and this gives me an opportunity to play soccer which is what I like,” said Borum.

Cheer coach, Sophorn Ven, said that both roles are beneficial to her because she gets to know her students in a different level, outside of the classroom there is different bonding with going on field trips and doing things together as a team. Ven said, “The hardest thing is trying to find time to be good at both things I feel that I’m better at teaching then coaching, I wish I had more time to become better at coaching.” “I chose cheer because its something fun to do however if I had to choose between both I would prefer teaching because school is more important,” said Ven.

SRLA coach, Nathaniel Broguiere, said that being a teacher and a coach helps him because he gets to work out in school more than working out at home. Broguiere said, “As a teacher and a coach they are both joys, if I had to choose between both I would prefer teaching because I do that every day.” For Broguiere coaching takes a little time away from his teacher work but he decides to do it after practice. Broguiere said, “It feels good having both responsibilities, like when I’m in a classroom it feels cool and when I’m coaching I feel sweaty.” Finer and Davis needed help with SRLA so Broguiere decided to help which is the reason he chose to be a running coach.

These are the eleven coaches at Animo Jefferson that take on workloads in different ways and manage to teach students while having to prepare to coach after school. Basketball, SRLA, Soccer, and Cheer are the sports at this school and the coaches want to make a difference in the lives of their students and athletes.