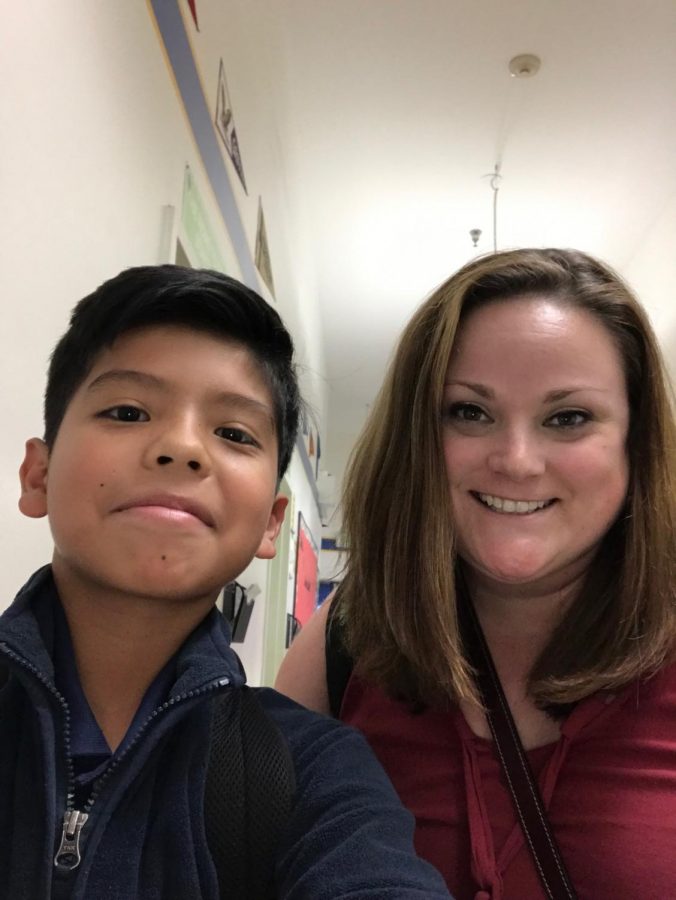 Ms.Borum (a teacher) is an English and a composition teacher and she loves her job of being a teacher. But she had to go through many challenges to get to where she is right now.

Ms.Borum always wanted to play the teacher in her childhood and her family were teachers, so that inspired her to also become a teacher.

She had to go through so many challenges.  She would get exhausted because she only got a few hours of sleep. She had to go to work, go to school, take a lot of tests, and sub for teachers. Another challenge that she faced was that there were no teaching jobs with the credential that Ms.Borum had.

She still made it through this challenges and became a teacher. But Ms.Borum thinks that being a teacher is not the easiest job but being able to see that her students are graduating and seeing how her students have made progress in her class is rewarding to her.

Transcript:
Christian Ramirez: Okay so my name is Christian Ramirez and I’m 13 years old and today’s date is 9/9/19 and my fist question is wh-what is your first and last name?

CR: Okay umm what subjects do you teach?

CR: Okay, what made you want to be a teacher? and what I mean by this who or/and what inspired you to become a teacher?

EB: Um a lot of people in my family are teachers, um so i would say that they probably inspired me maybe specifically my aunt Mary. She was the first person in my family to like graduate and go to school and then she became a teacher and a lot of  of my cousins after her became a teacher and um I would say [conversation with another student] l’m sorry Christian, um so I would say that she probably inspired me the most to become a teacher [A kid is having a conversation with Elizabeth Borum]

CR: So what made you want to teach composition and English?

EB: I didn’t originally actually i originally wa-thought I wanted to do elementary school,I went and got my sp- my multiple subject credential so I could teach elementary,  and then uh I had a friend from college who was working here at Jefferson and she was like there is a English position open uh if you want and they’ll give you a year to get your single subject. Um so I came and I started teaching English and I really liked it. Um and then that year was the first year that the school was open, so we were kind of for the next few years moving classes around and um I took over composition when the teacher who had been teaching it left, and um I loved it, like composition’s one of my favorite classes to teach um because I feel like I get to do so much with it.

CR: Wh- Umm how did you get to where you are?-Um what I mean is what did you have to go through in order to become a teacher and what was the biggest challenge you had to face during this process?

EB: Hm um I had to take a lot of school, I took four years getting my undergraduate, and then um after I graduated with my bachelors in liberal studies I got. I had to go back to school for a year to get my single, my multiple subject credential. Um and then when I got hired here, they gave me a year to get my single subject credential. So I got my single subject English credential and then just recently  I went back to school to get my masters, and to get your credential you have to do student teaching, you have to pass the CSETs, all the CSETs. So I’ve taken the CSETs for my multiple subject credential and for English, um the CSET, they recap a lot of test. Um my biggest challenge was when I graduated in 2009 with my credential there were no teaching jobs. Um all of the teachers were getting uhm pink slipped cause the economy kind of fell out and a lot of people were losing their jobs. So it was impossible to get a job. So between 2009 and whenever I got hired here, I wasn’t teaching and I just wanted to work in schools. So I was like subbing, and I was a reading interventionist. But that wasn’t enough because it was part time to pay my bills. So I was working full time at In-n-Out and I was working at In-n-Out from 5:00 PM until 3:00 AM, in the morning. I would get a couple hours of sleep uh and then I would go to my next job. Wake up at 7:00 AM and was at my next job by 8:00 AM and I would work from like eight to noon. Come home, sleep a few more hours and go to work at In-n-Out and that was really hard and challenging because I was exhausted [laughs].

CR: How did you know what you wanted to be when you grew up? How was your childhood like?

EB: [Breaths in and out]  I think a always wanted to be a teacher, um my grandpa was really ha- like handy and found like wood  and he built like a little playhouse in the backyard for me and uhm we would go to uhm like swap meets and uhm we went to a few uhm garage sales and we found like a white board- I’m sorry a chalk board cause white boards were not a thing then chalk boards, and they even found like some old desks that we bought from like uh garage sale, and I literally had like a little school set up in our backyard because uhm he built it for me and uhm I’d always wanted to play the teacher. I always loved working with students and kids um when I was younger I would do, I would work with [inaudible]  I did uh- I did like uh what’s it called, Sunday school I did Sunday school for a while, uh I was always working with kids and so I- I knew that that was something I wanted to do.

CR: In all the years that you have taught at this school what is the happiest moment you’ve had?

EB: [Breathes in and out]  You know there’s a lot, I have a lot of really good moments uhm, but I think you know you go into teaching hoping that you’re gonna inspire your kids, and you go into teaching hoping that you’re going to push them to be better and to become really awesome things and I think watching our first graduating class that I taught um in Jefferson’s first class ever graduate and to see some of them be valedictorians, going to UCLA, or um even just having students come back who are like I want to be a teacher and like you helped inspire me and now I want to inspire others, um I think and then when I was at that graduation one of my advisory kids he had walked off the stage, he found me in the audience, and he came and gave me a hug and uhm you know it’s moments like that  that make all the really difficult parts of being a teacher because it’s hard, but it- it’s really what makes it worth it because I mean even if I had helped to inspire or change the life of a handful of kids, you know that’s what I became a teacher for, so that’s what makes it rewarding.

CR: Do you like being a teacher why or why not?

EB: I do. It’s hard sometimes, it’s not the easiest job in the world. I think people think it is sometimes but it’s definitely not, um but you know it’s really rewarding, it’s different everyday, um the students that I work with are you know sweet, and they are funny, and they have their own personality’s and I like to try to push them to be better and you know see where they were with writing at the beginning of the year and where they are with writing at the end of the year, it’s always kind of rewarding to see that there was so much growth.

CR: Has anyone or anything motivate you why or why not?

EB: My students motivate me I never want to let them down um I want to try to produce and give them meaningful work uhm I read a lot of teacher blogs so other teachers motivate me they give me ideas to try new things [inaudible]  I’m always looking for something new, something better, something fresh you know and I think that is what makes your job diff- difficult but also makes it fun and entertaining uhmm what was the other question.

CR: Do you wish to have another job instead of being a teaching?

EB: No, I think sometimes I joke about it cause I on the weekends I would like to not be working and I look at my friends who are not teachers and they’re like totally fine not working and I’m like I have to go home and grade papers, or I have to go home and lesson plan and you know I would joke about it, but my um- my friend asked me the, the, the- the other day if you could have any job in the world what would your job be that was such a hard question for me because I have the job that I wanted I ever wanted to be a teacher and I am a teacher, and I really liked that I have my admin credential, so I could be principal one day or maybe work into the district office but I just don’t see myself ever leaving education like that’s really what I wanted to do.