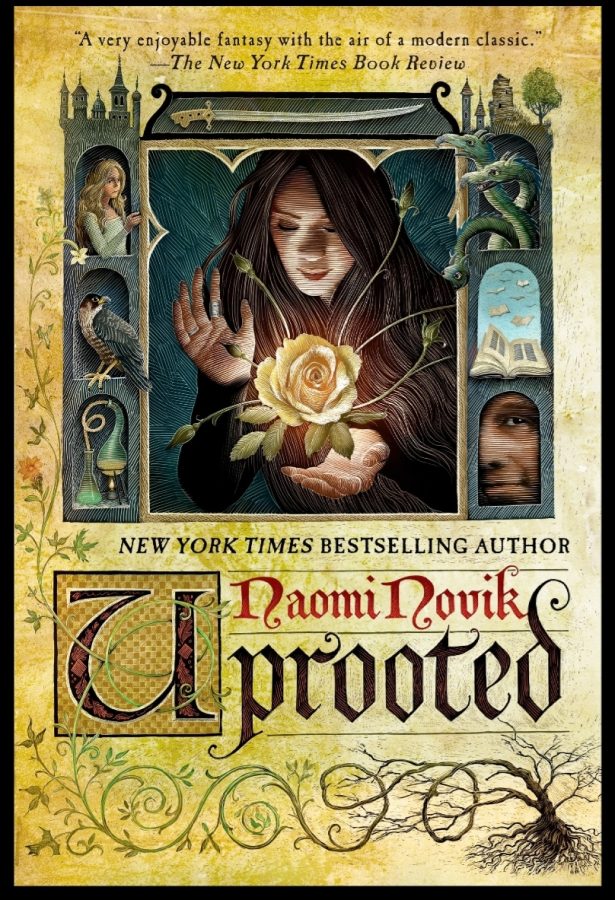 This is what the book cover looks like. I think it looks fancy with Agnieszka holding her hallucination spell, which is a flower at the moment.

Naomi Novik’s book Uprooted is about a village girl named Agnieszka who is happy to live with her family and friends, even though she is thought of as somewhat imperfect. Not many people believe she will be chosen by the Dragon because they think she is not fit for it. Instead they think it will be her friend Kasia. Although none of the girls in this village want to be picked, one of them will have to and after that, they don’t come back, and if they do, it’s as if they are a whole new person. What does he do to them there? No one knows, and that is what Agnieszka will find out when she suddenly gets picked by the Dragon. This will be the beginning of her journey to help save herself and her village from the Woods.

Agnieszka (Agnieszka of Dvernik)  is thought to be weak and very self-served, but in reality, she’s strong, determined, and most definitely not self-served.

Sarkan (The Dragon), also known as ‘the Dragon’, is a very powerful wizard who is thought of as dangerous, mean, and ignorant when, once you get to know him, he is actually not very dangerous. He is a bit mean but you’d be a fool to get him as mad as everyone had said he is, and he isn’t ignorant if you give him a reason to not be.

I really enjoyed reading this book. I enjoyed it especially because once you read it, you can’t really stop, it just keeps you on the edge of your seat. I really liked the fact that this book’s writing is detailed to the point in which you can imagine it pretty well. The way that the author writes this entire book’s conversations between the characters and describing the way that they’d say it really makes it seem as though characters are speaking both their minds and expressing their emotions. I feel that in the way that I read this book, it really makes me think I can relate to some of the characters in a weird, yet clear, way.

It is well written, as in, it has many details and it’s written as if it really were from that era. For example, a quote that I like from the book is “Her clothes are too fine and she talks like a courtier and she’s been living alone with a man for ten years, so of course she’s ruined, even though the girls all say he never puts a hand on them.” I chose this quote because I felt that it was important. It is talking about what all the girls (taken by the Dragon) tell the people once they are released from the Dragon’s tower after ten years. This quote also, somewhat, describes what the girls are like, for example, their clothes and how they talk. This shows that the people in Agnieszka’s valley home are not known well with ‘fine’ clothes.

I would suggest that people who like drama, suspense, action, fantasy (like folklore, fairy tales, or things of this sort) and a tint of romance should read this book. The drama, suspense, and action are merged into one at times, but that is what makes this book interesting and fun to read. The tint of romance isn’t really clear at first, but it does get more interesting and better later in the chapters.